King Island lies northwest of Tasmania in the path of the Roaring Forties, the ever-present westerlies that circle the world’s southern latitudes. It’s an island of long, empty beaches and clean, fresh air, of offshore reefs, rocky coasts, dairy farms, lighthouses and shipwrecks.

It is renowned for award-winning creamy cheeses, succulent beef produced on lush pastures, and fresh seafood.
King Islanders have a special relationship with the sea. The island’s kelpies gather bull kelp tossed ashore by storms, while cray fishermen and abalone divers harvest rich catches from beneath the surface. On King Island’s flat farmlands, beef and dairy cattle shelter behind thick ti-tree hedges – the lush grass is the secret to the succulent local beef, rich cream and wonderful hand-made cheeses. You can visit the King Island Dairies shop next to the cheese factory, taste the cheeses and select your favourites to take home.  Wallabies and peacocks abound – be careful driving at dusk. Shearwater rookeries pepper tussocky coastal hillsides, and you may sight albatrosses and mighty sea eagles riding the updraughts. 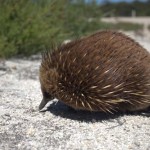 Australia’s worst maritime disaster occurred here in 1845, when the Cataraqui grounded. Today, Cape Wickham lighthouse – the tallest lighthouse in the southern hemisphere – guides mariners safely into Bass Strait but you can still explore the island’s most important historic sites on the Shipwreck Trail.

Reid Rocks, 12 kilometres (7 miles) offshore, is home to a major breeding colony of Australian fur seals. King Island’s wildlife, both native and exotic, can sometimes surprise – yes, that was a pheasant you saw in the roadside hedge. And yes, it is a paddock of grazing turkeys. But the most pleasant surprise is the warm King Island welcome – in Currie’s motel and friendly pub, in Grassy’s local store and craft shop, in cottages and bed and breakfast and from everyone you pass on country roads.

Flinders and its 51 surrounding islands are all that remain of the land bridge that once connected Tasmania to mainland Australia.

This is an island of dramatic and varied landscapes, from the pink and grey granite cliffs of Strzelecki and Killiecrankie to the gentle, green farmland that rolls through the northern part of the island. Flinders is an island of prolific bird life and wildlife. By the eastern lagoons and inlets, thousands of migratory birds rest on their long flights to breeding areas north of the Arctic Circle.

On many nearby islands are the rookeries of the southern hemisphere’s most numerous bird species, the amazing shearwaters, which make an annual journey of thousands of kilometres to the Arctic circle, then return to exactly the same burrow each year. The island’s dense coastal scrub shelters wallabies and wombats. It’s an island of friendly locals – take a stroll through the towns of Whitemark and Lady Barron or the little settlements of Emita and Killiecrankie – you’ll meet people with time to stop and chat.

It’s an island with a rich heritage, both sad and boisterous – at Wybalenna, the Tasmanian Aboriginal people, relocated during the 19th century, pined for their homelands.

On offshore islands, rough and ready sealers camped. On hidden reefs, ships foundered and sank.
It’s an island of cosy beachside cottages, a couple of local pubs and friendly bed and breakfasts.